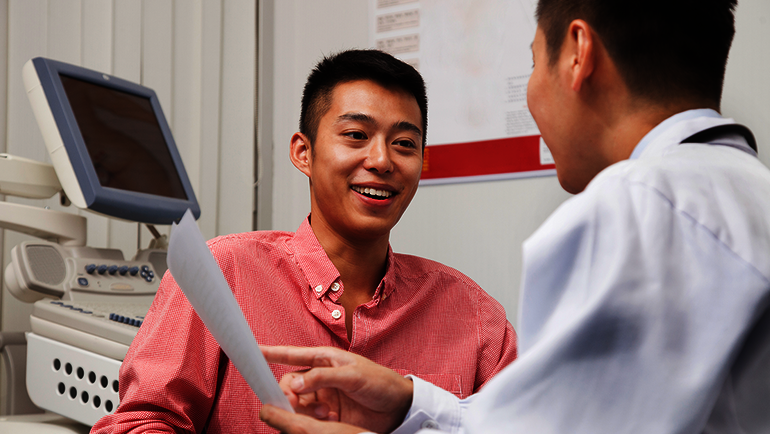 Reaping the benefits of PCC in China

In a country where 27.8 million people are estimated to have a hearing disability, the task of driving change is no small endeavor. Like in many other parts of the world, it’s been a common default in hearing healthcare in China to focus mainly on technology and pay less attention to the person with hearing loss.

However, as we’ve entered the Year of the Tiger, a growing group of hearing care professionals are passionately pushing for a paradigm shift. A shift towards a future where the client is at the core of care.

About a year has gone by since Dr Mei, Dingxiang Feng, Ida’s China Consultant, first started her work to expand person-centered care (PCC) in China. In this short time, she’s seen massive interest from across professional organizations, patient associations, academia, and industry – and she’s managed to establish a strong advocacy group of key opinion leaders and engage a community of more than 1,500 hearing care professionals.

A central figure in the advocacy group is Professor Ma Furong, Vice President of the Second Committee of the ENT Department of the Chinese Medical Doctor Association. In reflecting on the remarkable achievements of the group in just 12 months, Professor Ma says, “This is a group of true pioneers in PCC. We’ve made great progress in promoting the approach in audiology – and I very much hope that PCC can extend to other fields as well and help transform the wider medical model in China.”

Below, we’ve gathered some of the results achieved by the group, demonstrating significant value for individual practitioners and their clients – as well as a clear return on investment for businesses.

During 2021, Xiaofeng Li, Director of the Sheng Yixuan Audiology Center in Shanxi, decided to implement PCC in his practice. Initially, there was some reluctance among the team as they were concerned it would generate more work and require more time. To measure the value of the approach, Xiaofeng therefore split the team into two groups for comparison, one continuing to work according to a traditional approach and the other explicitly practicing the principles of PCC.

After 20 appointments, a client satisfaction survey revealed a substantial difference: the clients who had received PCC reached a 90% satisfaction rate, while the satisfaction among the other group was merely 50%.

The full team therefore decided to integrate PCC into all processes, including history collection, counseling, testing, fitting, outcome evaluation, and follow-up. PCC was formulated as part of their mission and KPIs – and considered in the overall clinic design.

Using this process, Xiaofeng implemented PCC in two hearing aid centers and saw substantial improvements, including an increase in word-of-mouth referrals and greatly enhanced job satisfaction among the staff. Specific measurements revealed that:

In considering the economic, psychological, and social benefits of PCC, Xiaofeng states, “It is crucial to understand the essence of PCC and include the principles in all aspects of the hearing center operation. The approach is beneficial for audiologists, clients, and hearing center owners – and brings financial growth as well.”

At the Jiayin Hearing Center in Zhejiang, Director Zhihong Zheng has also seen a tremendous change as a result of PCC. Zhihong explains how the approach has helped her to overcome professional burnout and regain her passion at work: “By applying the six core principles of PCC, I can now communicate with clients more smoothly, create an open dialogue, build trust, and understand the client’s core needs. As a result, clients are more motivated and much quicker to accept my recommendations. In addition to the technical skills, audiologists need PCC capabilities. They need to speak in a language that clients can understand.”

A crucial part of achieving successful implementation is ensuring that the resources available are culturally suitable. Dr. Liping Zhang, Director of the Hearing Aid Center at the Shandong ENT Hospital in Shandong, has therefore tailored the Ida Institute Motivation Tool the Box to reflect typical challenges for the elderly population in China. The adaptation considered various aspects, such as the negative social impact of hearing loss, psychological cognitive characteristics, decreased physical flexibility, overall health, and personal economy, as well as the support of family members.

With the adapted tool, Liping has seen great results, “The Box enables people to weigh the pros and cons and accelerate the decision-making process. I recently used the tool with an elderly client who had previously denied his hearing loss. By using the tool, the client now recognized the communication barrier between himself and his grandson, and he ultimately accepted his hearing problems and decided to get hearing aids.”

As these cases clearly demonstrate, the PCC approach is gaining traction because it works. Not only are the results appealing at a client and practitioner level – but the benefits are tangible for business owners as well. As such, it’s hardly surprising that the Year of the Tiger seems to bode well for the blooming PCC community.

Looking back upon an eventful year and a series of great achievements in China, the Ida team would like to extend our warmest gratitude and appreciation to the Chinese PCC advocacy group, including Professor Ma Furong, Dr. Wen Jiang, Dr. Hongbin Tian, Dr. Liping Zhang, Zhihong Zheng, Dr. Carol Pang, Xiaofeng Li, Dr. Guoping Li, Dr. Guoyi Liu, and others. Not only have they integrated PCC knowledge and Ida tools into their clinical practice, but they have also shared their experiences and promoted PCC in China, helping to spark awareness and excitement around the topic.