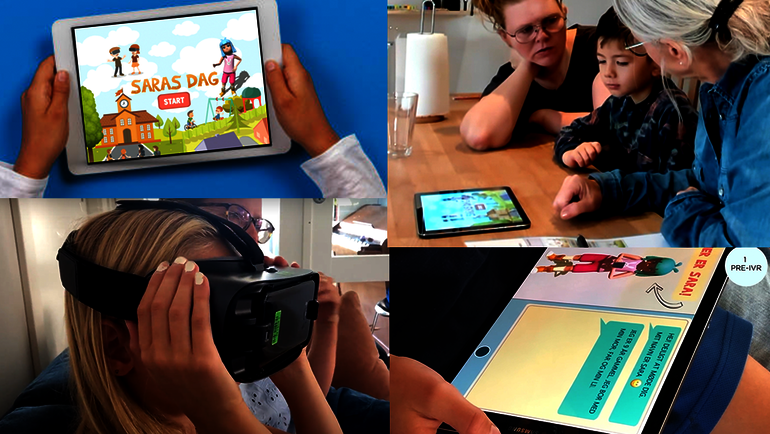 Like healthcare in general, the world of audiology is currently morphing into something new. Consumer behavior is changing, global trends are shifting, and technology is advancing at an astonishing pace.

2021 witnessed a multitude of innovations in hearing healthcare. As the year is drawing to a close, the Ida team is proud to see an example of this inventiveness manifested in Sara’s Day – a virtual reality (VR) pediatric tool developed by our former student assistant, Nele Kadastik.

The tool was recently presented at the International Conference on Interactive Digital Storytelling and published as part of the Springer Lecture Notes in the Computer Science “Interactive Storytelling” series.

Using VR to engage children in their own hearing care

Sara’s Day is a pediatric communication tool based on VR and designed to support hearing care professionals in their communication with children during audiology and speech and language therapy appointments.

The tool integrates methods from narrative and play therapy and aims to promote a child-centered approach, encouraging the child’s self-advocacy and self-efficacy skills through active participation and engagement during the appointment.

A scarcity of relevant tools

One of the key incentives for developing this narrative-based transmedia hearing counseling tool was the gap in existing solutions.

Kadastik explains, "While it is increasingly acknowledged that child-centered communication and recognizing the child's needs and preferences are central to effective rehabilitation, there is a scarcity of relevant tools. Sara’s Day considers children's play and communication habits in the current digital age – and is specifically focused on supporting more effective child/provider communication during the appointment."

Sara’s Day builds on a narrative framework that applies a transmedia approach and splits the counseling process into three stages: 1) the exploratory stage, 2) the immersive stage, and 3) the reflection, strategy, and decision-making stage. These stages are distributed across two different media: a tablet-computer and a smartphone-based VR.

Initially, the child is greeted by a character named Sara. Sara has hearing loss and has difficulties hearing in certain situations and places. After being introduced to Sara’s story, the child is asked to share a few things about his/her experience with hearing loss in three different communication environments: playground, school/kindergarten, and home.

The various questions and tasks were inspired by some of the elements featured in the Ida Institute Living Well for Teens and Tweens tool, which helps clinicians identify and understand the child’s priorities and concerns.

The second, immersive stage is centered around the 360-degree video mobile VR experience. Using Sara as avatar, the child can explore the previously selected environment through her eyes. Each video scenario conveys several scripted situations that a child with hearing loss might encounter on a day-to-day basis, e.g., in school/kindergarten. While the child explores Sara’s world in VR, the professional and parent(s) can follow the child’s experience on the tablet.

The first two stages aim to establish a common narrative communication platform enabling conversation around specific themes embedded in pre-constructed fictional or non-fictional narrative elements. This platform serves as the base for the reflection, strategy, and decision-making stage.

The reflection, strategy, and decision-making stage

In the third and final stage, the focus is on involving the child in the problem-solving and strategy-building process. This is done through a play activity to help Sara hear better in the previously selected and experienced environment. Inspired by the Ida Institute My World tool, a drag-and-drop play activity introduces an environment with scenario-specific moveable objects – e.g., TV, speakers, and other electronic devices – and various replaceable characters.

The activity also involves a drawing function, allowing the child to draw missing elements, or simply modify existing ones. Later, the child’s creation from the activity can be saved and shared with the child and parent(s) – and subsequently used during follow-up sessions.

Sara’s Day was developed by Nele Kadastik as part of a Medialogy master’s project under the supervision of Associate Professor Luis Emilio Bruni at the Augmented Cognition Lab at Aalborg University, Denmark. The tool was co-designed and evaluated in collaboration with hearing care professionals and specialists from the Ida Institute.

There are no specific plans currently to make the tool publicly available – however, depending on the level of interest, this could be considered in the future.